Gods in the Omniverse

There is only one actual deity and he exists among and beyond all things. Other “Minor Deities” are actually other Sentient species created earlier in the history of the Omniverse. When the younger races came into being, they treated their predecessors like gods. Some of the first children shunned this misunderstanding while others embraced it. Some of the pantheons of the Omniverse are reluctant benefactors who have simply grown weary of correcting their younger siblings; Others genuinely believe they are divine; still others are fully committed to continuing the deception. Denizens of the Omniverse debate how involved the creator continues to be in his creation; some point to the existence of usurper pantheons as proof that the creator has long since abandoned his creation, others advocate that the creator is akin to a grand machinist who has contrived inter-workings, timing, and positions to bring out his ends; still others insist he gets directly involved in the Omniverse, relieving suffering, advocating for the righteous, and punishing the wicked.

The Omniverse is composed of all the possible universes that may exist. There are no spacial relationships between universes so going from one to another is not a matter of hopping on a rocket and flying there. Universes are different expressions of matter and space and traveling from one to another is a matter of Synchronizing with that expression. The more similar the universe is to the one you are in the easier it is for you to travel to it, this property actually helps Omninauts from Syncing into hostile environments.

Escaping the confines of your universe is a significant metaphysical event. It is often the culmination of a culture's scientific, mystical, or evolutionary endeavor. Often dimensional travel methods are shared within a multiversal cluster, this is part of what bonds universes together into multiverses.

There are two basic methods for traveling to another universe; phase shifting and portal jumping. There are an infinite variations of these methods but each boils down to one of these two methods; Take Mohammad to the mountain or bring the mountain to Mohammad.

Phase Shifting is where the traveler slides from one universe to another. His body makes the journey. The most basic forms of Phase Shifting only permit the transfer of the traveler's body into a random alternate universe, usually the most similar universe at that point in time. Phase shifting tends to be much less stable than portal hopping, therefore phase shifts tend to be much less predictable than portal crossings. Further development of Phase shifting will allow the traveler to keep the clothes he is wearing, equipment he is carrying, or even other travelers he is in physical contact with. Some phase shift methods have been developed to allow the traveler a return home feature that pulls him back to his point of departure; rare others allow the traveler to pinpoint his destination in universe and geography.

Portal Hopping is a method of interdimentional travel where an opening between realities is used to move from one to another. This can be ancient mystical caves or on demand portal casters.

In the Omniverse, power is derived from the three motivators of sentience; the Spirit, the Soul, and the Will. Typically a being will manifest one of theses motivators stronger than the other two. this doesn't  mean a beings powers are derived excusively from one or the other. in fact it is very rare to encounter an enity only manifests one of the three motivators.

History of the Omniverse

The Origin of the Omniverse

The first children stepped out and found a firm foundation. they looked about and saw that thier progenitor had set the Omni into the foundation. Around the Omni they built a forum and around the forum they set their homes. Their children set their homes just beyond those and their children set theirs just beyond those. As each generation piled onto the next the first city arose they named it Zion.

For Millinia the people of Zion grew and spread. They dispersed across the heavens and filled worlds. In their growing and spreading they grew apart. Those that were brothers became diverse in form and creed. Worse yet these brothers came to hate one another. Squabbles became wars. the years of war came to outnumber the days of peace. there were those that came to believe that the varied races and creed could not coexist.

Their reality was held together within the Omni ; it would be through the Omni that they would achieve "peaceful" separation. there came a worldbreaker with a great hammer; The worldbreaker struck the Omni . The Orb didn't give. The Worldbreaker continued to assail the Omni with blow after blow; it would not break, but under it's surface, fissures formed; and with each strike the fissures multiplied. The Worldbreaker grew weary and collapsed baffled that the orb withstood his onslaught.

Outside the forum, the effects of the attack were evident. The initial blow shattered reality into many divergent facets and each subsequent blow shattered those facets into branches and sequels. As reality split, entire worlds and sectors were pulled into their own separate quantum streams creating new self contained realities. theirs was no longer a Universe, but a multiverse of multiverses, an Omniverse.

The Exile Cluster- The Marvel Multiverse- Defining characteristics of the Exile Cluster are Celestials, Watchers, The Captain Britain Corps, and The Nexus of Realities.

the Dreamway- This is the Omniversal Collective Unconscious. It is the source of dreams.

Zion- The bridge of the Omniverse. Several multiversal clusters connect through Zion. The city maintains its own government and municipal services. The city functions much like a interdimentional port much of the limited space is taken up by warehouses. It also fills a dual role as a center for diplomacy. It is one of the few places in all existance where Angels and Demons sit in mediated peace talks.

There are three principles (or heuristics) governing Omniverse: the Rule-of-Three, the Unity of Rings, and the Center of the Omniverse.

The first principle, the Rule-of-Three, says simply that things tend to happen in threes. The principles which govern the planes are themselves subject to this rule.

The second principle is the Unity of Rings, and notes that many things in the Omni are circular, coming back around to where they started. This is true geographically as well as philosophically.

The third principle (fitting neatly into the Rule-of-Three above) is the Center of All, and states that there is a center of everything — or, rather, wherever a person happens to be is the center of the Omniverse... from their own perspective, at least. As most planes are functionally infinite, disproving anyone's centricity would be impossible. In Elseworlds, this is meant philosophically just as much as it is meant in terms of Omniversal geography.

Legends of the Multi-Universe Wiki- http://legendsofthemultiuniverse.wikia.com/wiki/Legends_of_the_Multi_Universe_Wiki 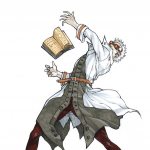