Born on a Monday. Christened on Tuesday. Married on Wednesday. Took ill on Thursday. Worse on Friday. Died on Saturday. Buried on Sunday. Is this the end of Solomon Grundy?

Undead Warden of Arkham Asylum this stalwart official has a standing offer, If anyone can pass though him they can leave the asylum, so far only Superman has been able to pass beyond the gates. 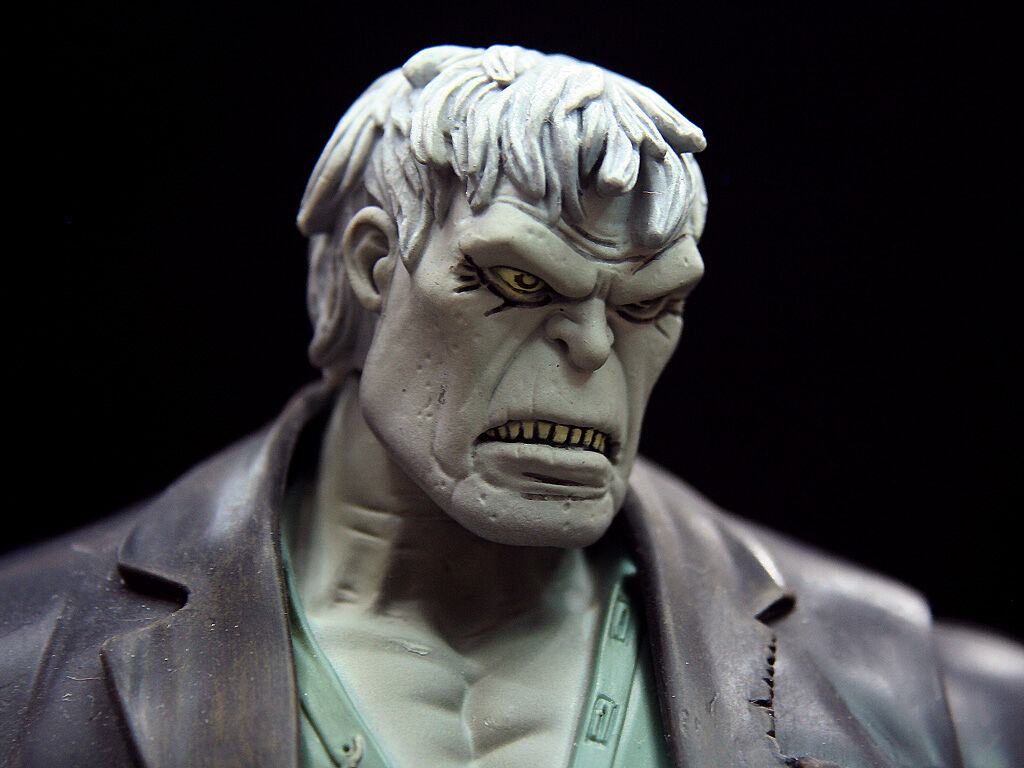 Solomon Grundy frequently dies and resurrects in new incarnations, each of varying levels of strength and intelligence. Although primarily evil, some of his incarnations have shown the capacity for heroism.

Solomon Grundy is arguable one of the heaviest hitters regardless of evil or good intentions. He is also incredibly invulnerable, able to take massive amounts of damage with little injury. When injuries do occur, his body rapidly in a matter of seconds heals up the wounds, sometimes enabling himself to re-attach severed limbs right after they are hacked off. He can also continue fighting for days straight, making him incredible resilient in addition to his huge strength.

Because he is artificially animated, Solomon Grundy isn't affected by disease and ailments like standard humans. He doesn't need to eat, breath, sleep or drink, although occasionally he has fallen asleep in the sewers and attempted to feed on intruding humans to the swamps he calls home. Most likely this is a side effect of his re-animation that, over time and when near to transforming into Cyrus Gold, his body, in preparation, begins to systematically shut down in preparedness for the transformation, rendering him lethargic. The hunger is similar to movie zombies, but isn't as intense, suggesting that to fuel his body he needs to intake living flesh to sustain his own semblance of life. But unlike Romero zombies, he isn't biased and will eat anything from rodents to even attempting to eat Killer Croc during a territorial squabble.

Solomon Grundy, despite being undead, can and has died multitudes of times. However, with each death, he re-animates soon after, acquiring even more strength than before and sometimes a personality with average to high intelligence (although this is incredibly rare). Grundy for a time was able to control plant and wood energy due to the amounts of tree product that had formed inside his decayed body. This proved useful in defeating Alan Scott the Green Lantern several times before eventually losing this ability.

Grundy has also proven to be able to absorb certain forms of energy and manipulate them at will. This ability has always been subconscious to the point of being accidental, though, but it would suggest that Grundy is even more powerful than he has the intelligence to realize.

The weird elemental energy that imbues his form with pseudo-life makes him virtually indestructible - he is impervious to bullets, fire, and extreme cold, and can survive indefinitely without food, water, or oxygen. The only thing that has ever been able to hurt him was the Mist's special toxins, developed to take out Grundy's plant tissue body.

Even when he is destroyed, he has always been reborn sooner or later. The soul of Cyrus Gold enjoys his pseudo-life through Grundy, even though Gold's whole personality is never present in Grundy's "life." Grundy's personality differs from incarnation to incarnation, but he seems to retain some memories of his experiences from one time to the next.

Grundy can perform physically strenuous tasks for an indeterminate period of time before tiring.

Solomon Grundy possesses tremendous strength and stamina, the level of which varies with his different incarnations. Sometimes, he can be held by a group of normal humans. On other occasions, even Superman has not been able to defeat him.

In the recent Brightest Day/Blackest Night cross-over event, Grundy was given a Black Lantern ring. Alongside his super strength and invulnerability, he was given access to the ring's dark capabilities.

Grundy's below average intellect makes him easy to fool and manipulate.

Community content is available under CC-BY-SA unless otherwise noted.
Advertisement