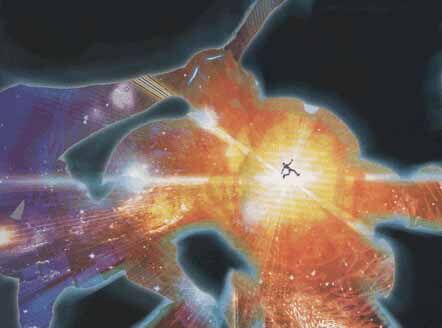 The Exile Cluster is the collection of alternate universes which share a universal hierarchy; it is a subsection of the larger Omniverse, the collection of all alternate universes. A large variety of these universes were originated as forms of divergence from other realities, where an event with different possible outcomes gives rise to different universes, one for each outcome. Some can seem to be taking place in the past or future due to differences in how time passes in each universe. Often, new universes and dimensions are born due to time-traveling. Eternity once stated that there are almost infinite aspects of itself, thus establishing the Marvel's positioning then. Afterward, the Beyonder estimated there is a "seemingly endless number of dimensions" to thereafter explore the entire Multiverse and its "myriad planes." The Crossroads also leads to an infinite number of dimensions. In addition, the Molecule Man, who was almost omniscient, has also postulated that there are infinite parallel dimensions to Earth's universe that together comprise the Multiverse. Finally, it was later stated in the Book of the Vishanti, which details the Marvel cosmology, that there is "literally a transfinite number, that is, a number greater than infinity" of universes in the Multiverse. There is also a transfinite number of Multiverses. The Multiverse was further described as boundless by the Captain Universe.

Dimensional planes of the Exile Cluster

Universes of the Exile Cluster

Reality where Humans and Mutants are fully reconciled.

A Marvel Reality on DC Geography